Allow me to explain why most comments you read about the Singapore start are wrong... 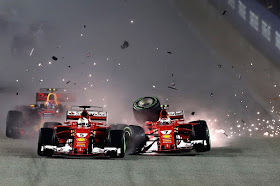 I had to jump in, for what it's worth, to explain why the response to the first lap crash at the Singapore GP was an even bigger clusterfuck than the clusterfuck itself.

I think peak bullshit came when the collective British and Dutch twitter contingent clutched their pearls after Ferrari put out a tweet containing a simple, if not fully grammatical, statement of fact:


VER took #Kimi7 out and then he went to #Seb5 #SingaporeGP
— Scuderia Ferrari (@ScuderiaFerrari) September 17, 2017


Yup, Max did bump into Kimi who then hit Vettel.   That is how the incident played out, mechanically.   Heavens forbid anyone describe the sequence of events.

What's more interesting is the WHY it happened.   And here, the Spanish fans, pining for Alonso blamed Vettel,  Italian Kimi haters blamed the Finn, the British mostly remarked on Hamilton's skill at being on the other side of the track while tisking at Vettel's "Schumi chop",  a move Lewis successfully pulled off at Monza two weeks ago.  The Dutch? They mostly showed class by blaming Italians for having better food that they ever will.  And Vettel fans, they pretty much blamed Max.

In short,  everyone just saw their bias. Is it worth it to assign blame?  Sure, but it was a racing incident firmly in the "shit happens when you point a bunch of cars into a corner you all have to get to first to win" bucket.

Two points, before we start

1) on a wet track, the "dirty" side has more grip.
2) Singapore, like Monaco, is a track you where, to win,  you have to lead out of the first corner.   Even more so in the rain.

OK so, to the start.  Vettel on the "clean" side has a poorer start than Verstappen and Raikkonen on the "dirty" side.  In fact everyone but Bottas has a great start on track left. Look at Alonso, Wow!

Verstappen, at the start, is pointing towards the right, hoping no doubt to cut off the Ferrari.

Vettel, for his part does what any driver in his situation would have done and is, by the rules, allowed to do, move to cover.

At this point Max realizes Kimi smoked him and and turns left to block him.   Notice how much room there is between Max and Seb,  the notion the Dutchman changed direction because of Vettel is not very likely.

Vettel cannot see the other Ferrari so it's plausible he though Max was going for the inside and increases the angle to cover more.

That Vettel actually timed the "chop" on Max to perfection is demonstrated by him not hitting the Red Bull at any time.   By millimeters, yes but fully ahead of the blue car when Kimi bangs into him.

Of all three, the one who is certainly blameless is Raikkonen, you can look at the clip and you can plainly see he is 100% straight up until the contact.

Vettel played a legal. but risky game and paid for it, no doubt. But you don't win a championship against Lewis and Mercedes by playing it safe,  Not in F1 and not on a track where you have to lead from the start to win. (unless you have Nelson Piquet jr.)

Max, as he has been known to do in the past, changed plans in the middle of something and shifted his attention from Vettel to Raikkonen.    He's aggressive and he has a lot to prove after the terrible season he's had so far.  That is part of his attraction but also something he has not quite worked out (see Hungary).

More interesting might be speculating if Vettel would have run into Raikkonen, had the contact not happened.   That might have been a possibility but, that's also science fiction and in the end, the stewards made the only possible call: