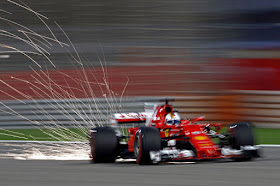 ....especially with a car that is not quite the best of the bunch. 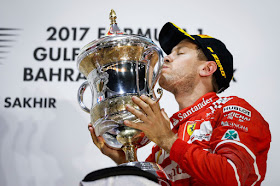 Ferrari still lacks the outright pace to dominate F1 but, with the SF70h, they have managed to put enough pressure on Mercedes to knock Lewis and company out of their comfort zone.

Did Ferrari win or did Mercedes lose in Bahrain?  Depends on who you ask,  does it matter?
One thing is for sure,  Hamilton was beaten off the line by Vettel and later managed a very silly penalty when he blocked Ricciardo into the pits.  Not the best of week ends for the World Champion whorls missed out on pole. 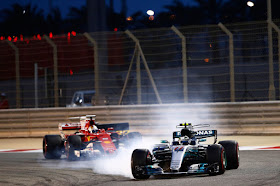 Ferrari gambled on an early stop and it paid off perfectly despite the safety car caused by the Sainz-Stroll, get together at turn one.

Vettel executed the race perfectly, great first lap, great fight with Bottas on the re-start.   Towards the end he was in the position to control the race and pace himself in front of a charging Hamilton.

Would have Hamilton have caught him without the five second penalty? Probably not but it would have been a different race.

The wheel to wheel moment between Vettel and Hamilton is brewing,  when it finally happens it could be a heck of a lot more exciting than Alonso driving at Indy. 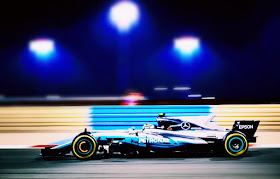