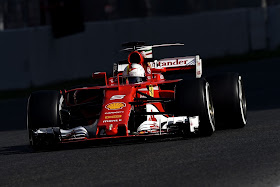 In the "good old days" Ferrari used to wield so much political power those on the receiving end renamed the FIA,  Ferrari International Assistance .

In recent years this has certainly not been the case, what with the sport bending over backwards to please Red Bull and Mercedes.

Don't have the player, hate the game right?

Well it looks like someone at Ferrari remembered to play the game again in a clever, rather than overt way.

What happened?  You can read all the fine details elsewhere but, in simplest form, Mercedes and Red Bull developed suspensions systems which they claimed were doing one thing while in fact were doing another, namely they influenced aerodynamics.

Ferrari had been aware of this since last season (see some of Sergio Marchionne's comments) and in the off season wrote to the governing body declaring their intention of utilizing a similar system in 2017.

Right, on.   The FIA clarified suspensions are not to be designed so as to influence aero and now Mercedes and Red Bull who had set up cars around that concept are forced to a more conventional system.  Ferrari saves the development time and cost.

Don't hate the player...  Mercedes and Red Bull would/will do exactly the same.