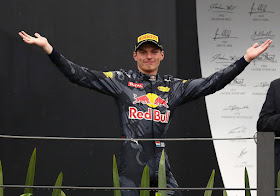 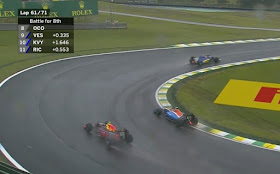 Startling statement from Toto Wolff, a man now at the pinnacle of Motorsport and one who has some understanding of physics himself.

But what Max should really get credit for is exposing Formula One groupthink.

Because what Verstappen did was something many of you with even basic track experience will understand,  he drove classic rain lines!

Driving off line and avoiding apes?  That's Skip Barber racing in the rain 101.

We got driver coach Peter Krause  on the horn:


"Max was doing everything Bruce MacInnes and other Skippy instructors have taught for four decades!"


So, the bigger question: are we to believe the top drivers in the world (and if you doubt they are, you didn't watch the race in Interlagos)  forgot how to drive in the rain?

Not exactly, but Verstappen exposed the rut many of them may be stuck in.

For years, high downforce and very good rain tires allowed drivers to largely ignore rain lines, relying on car setup to drive the essentially the same places on the track they would in the dry.   In Brazil,  a combination of factors dropped grip  below a certain critical threshold  yet most drivers appeared to not adjust their approach.

We also asked coaching guru Ross Bentley to weigh in:

"Verstappen's performance in Brazil illustrates a few things.  First, with youth often comes a good form of not knowing what you shouldn't do. In other words, he's naive, but in a positive way. Too many drivers, after just a few years, start to follow what they think they should do. And they believe what they think they should believe. Verstappen doesn't believe he has any limits, and that's why he's doing what he's doing in F1. Let's hope he continues this way, because it's what Senna and Schumacher did longer than most."

When I hear people like Toto Wolff saying things like Verstappen is "redefining physics," it also shows how even people at the top of the sport can get into this "follow others" mindset. Verstappen isn't redefining physics. He simply drove further off line than other drivers because he wasn't set in his ways, and there is more grip that far off line. On one hand, what Verstappen did was nothing special - go to any junior formula race and you'll see a lot of that. On the other hand, what he did was special because he didn't follow everyone else, or the way others think.!

This is the problem with the "funnel" approach. The higher they get, the narrower their view on what works. VES might be a tad immature, but he goes where there is grip, and he has ultimate confidence that IF he gets into trouble, he has the skillz to get out of it. Witness the epic save!


Yes "THAT" save, Let's have a quick parenthesis there.   I think even the most rabid Max fanboy will admit there was an element of luck involved but that said,  Max did everything he could, phenomenally right.     Pay attention how, once the car is sliding well over a 45 degrees to the direction of travel he locks the tires and straightens the wheel.  This gives him the best possible opportunity to prevent a tank slapper once the car straightens out in one direction or the other.    The true magic moment is the precision and timing of when Verstappen releases the brakes, taming momentum and catching the car.

A lot of drivers made a lot of saves this year at Interlagos. They will not get the glory the Dutchman will get and,  in part,  that's because it's show business.

When TV commentators and journalists rage about a driver's performance, and wonder how he's doing it, remember that they're being paid to entertain. Former drivers who are making comments know what's going on, but it's more entertaining to marvel at the situation. Or maybe they've just forgotten what it was like to be young and naive!

Young and naive FTW then,  it's all about an open mind.  A good lesson for all, no matter where you race or how old you are! 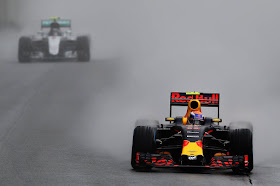