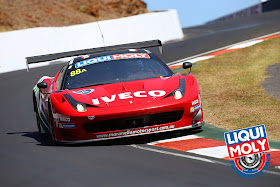 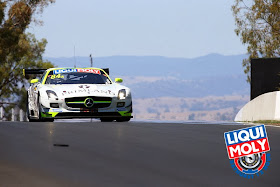 Australian V8Supercar  ace Craig Lawndes gave Ferrari their first ever win on Mount Panorama as he brought home the Maranello Motorsport 458 GT3 across the line just 0,4 seconds ahead of the HTP Motorsport Mercedes SLS driven by Max Buhk.

It was an an amazing end to the 2014 Liqui-Moly Bathurst 12 hour. which came down to a restart with just 12 minutes left. 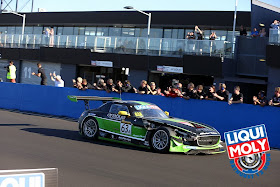 The Ferrari,  co driven by Mika Salo, Peter Edwards and John Bowe, had the edge on the twisty bits while the chasing Mercedes was clearly faster on the long straight and under braking, thanks to an earlier brake pad change.   Traffic played a part but Lowndes experience on the mountain track was crucial, the Aussie using all the track but in a very fair way. 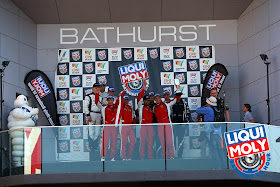 “Thirty minutes to go in the race and we had about a 25s lead over the McLaren, it was closing fast, it must have been having problems. Then the Mercedes closed the gap really quick, the safety car came out and it diminished any gap we would have had.
I knew the Merc was always going to be quick in a straight line, and these guys have been telling me all week the Ferrari is generally quick across the top and that is a section I really enjoy. I had to push hard to get a gap, to get a car and half for a bit of a buffer zone. I didn’t know if it was going to be enough"    Said Lawndes after the race

“With two or three laps to go, went down the outside into turn two, and was able to hold the inside line and get a gap, but of course, that diminished with some back markers. We didn’t change brakes, it was fading but it was ok.
Had to give it a couple of pumps going into the Chase, very thankful the time ran out and we didn’t have to do another lap. I was doing my best, running on the inside lines, making the Merc go around the long way, thankfully we had enough.”

The team dedicated the win to Allan Simonsen, who drove for Maranello Motorsport in past editions of the 12 Hour.

Check out the final minutes in this clip with commentary from Radio LeMans' legendary John Hindhaugh.  How does he do it?