Remember when the first batch of Ferrari 458 came out with a tendency to spontaneously combust?

You sort of expect this from Italian exotics but zee Germans?  They are serious people who would never make engineering mistakes, would they?

What is the world coming to: There are reports Porsche has suspended deliveries of all 991 GT3 until they figure out why they catch on fire with alarming regularity.

Details are sparse but there is no doubt one was incinerated in Switzerland recently,  the report is from the straight from the St.Gallen cantonal police web site: 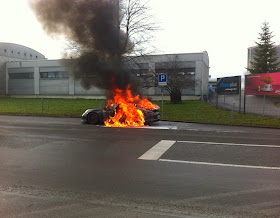 A Porsche GT3 drove on the A1 highway towards St.Gallen. When the driver perceived strange noises from the engine area, he left the highway. On the Wilerstrasse the driver stopped the car. He saw leaking oil and smoke is in the rear engine. A short time later the Porsche caught fire. The fire was extinguished by the fire department. The cause of the fire will be  investigated by the Forensic Science Service of the Canton of St. Gallen police.


But this was not a isolated case , apparently five cars have gone up in smoke under similar circumstances in recent weeks.  This was posted on the Rennteam forum


I am the administrator of Porsche Club Campania, an Italian Porsche club.
A member of our Club last Saturday was near Avellino, in the south of Italy, his gt3 was really new, just 60kms. First the warning LOW OIL PRESSURE in the display and after few seconds his GT3 was burning.
The gt3 DESTROYED is now at the PORSCHE CENTER NAPOLI and this morning an engineer from Stuttgart came here to see the car. It is the 5th gt3 in Europe that burned with the same problem. It seems that Porsche already know where is the problem but I don't know if the dealer will be able to fix the problem. I will keep you updated.

Not confirmed but via a friend of Axis who is well connected with all things Porsche comes this:


Effective immediately and until further notice, delivery of any new 2014 911 GT3 units must be suspended. This Stop Sale action is being taken in order to investigate a quality issue that potentially exists with the engine of the subject vehicles. While additional details are not readily available, please know this matter is of the highest priority in the Porsche organization


Maybe keeping that Mezger engines on the Supercup cars was a good idea.

UPDATE:
This story has since been picked up by Jalopnik,  Road & Track, New York Times, Sport Auto...just to name a few.
UPDATE:
Porsche issued the following

Atlanta. The sports car producer Porsche is inspecting all engines of 911 GT3 vehicles of model year 2014. Porsche is informing the owners of the affected vehicles directly and recommending that they stop using their vehicles. The company is offering to pick up the vehicles and take them to a Porsche Centre immediately.

Safety is a number one priority at Porsche, and the company takes its responsibility seriously. After engine damage occurred in two vehicles in Europe and the vehicles then caught fire. Porsche decided to inspect all 785 delivered vehicles worldwide. There was no traffic accident and no personal injure. Internal studies to determine the cause of the engine damage have not been completed yet.

Porsche will report on any new findings immediately.
AC at 10:51 AM
Share