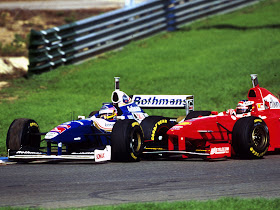 "I would never have made that corner without his push"  Jacques Villeneuve opens up about the infamous incident at the Dry Sack turn at Jerez in 1997.
That year coming into the final race, the European Grand Prix, Villeneuve had to beat championship leader Schumacher at all costs in order to win the title.

Turns out Villeneuve, driving for Williams Renault, played the future multi-champ like a fiddle.

"There was no way for me to pass him there but I tried anyway"  Villeneuve tells AutoBild Motorsport "I thought he might bump me because I had remembered what he did to Hakkinen in the Formula 3 finals in Macau" referring to Schumacher's straight line "brake test" of the Finn.

"In fact I had even discussed it with the team before the race and he actually did it!"

Schumacher bumped into the Williams but ended up stuck in the gravel trap, Villeneuve ironically ended up making that corner and the rest, as they say, is history.
AC at 7:27 PM
Share