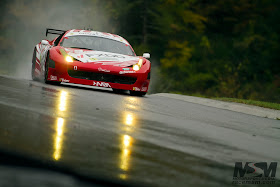 Taylor held off Antonio Garcia to win by .334 seconds, giving the No. 10 SunTrust Corvette DP its third victory of the season. Garcia and Richard Westbrook also ended the season as three-time winners in the No. 90 Spirit of Daytona Corvette DP.

Jon Fogarty and Alex Gurney rounded out the podium in the No. 99 GAINSCO Auto Insurance Corvette DP, followed by the two Action Express entries (the No. 5 of David Donohue and Brian Frisselle, and the No. 9 of Darren Law and Joao Barbosa), giving the Corvette DP a sweep of the top five places to cap its first year of competition.

Needing a ninth-place finish, Pruett and Rojas iced their fourth DP title in five years by finishing seventh in the No. 01 TELMEX BMW/Riley. Ryan Dalziel entered the race with a mathematical shot at the championship, but finished sixth in the No. 8 Starworks Motorsport Ford/Riley started by Alex Popow.

Lally then had to pit for fuel, promoting the No. 51 APR Motorsport Audi R8 of Dion von Moltke and Jim Norman to a second-place finish.

While 2012 GT champions Emil Assentato and Jeff Segal had problems early in the race that resulted in an eighth-place finish for the No. 69 AIM Autosport/Team FXDD Ferrari 458 Italia, a third-place finish by the late-entered No. 63 Scuderia Corsa Ferrari 458 Italia of Alessandro Balzan and Johannes van Overbeek gave Ferrari the GT manufacturers championship. 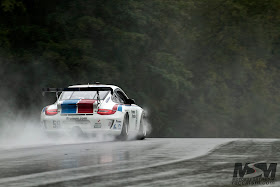 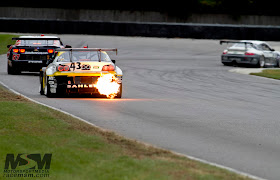 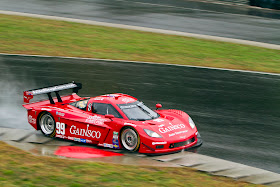