After the highs of the Bahrain GP,  F1 gave us a bit of a snoozer,  so dull that the race director waved the checkered flag two laps early.    So, not much action on track after lap 1 but plenty of drama happening,  psychological drama.

Hamilton has dealt Rosberg another big hit and Nico's body language in the pre-podium "green room" spoke volumes.  Yes  the german had no telemetry but he had the fastest lap, he had the higher top speed and he had more fast sector times than Hamilton, yet finished some 18 seconds behind.
Not much in the way of hugs after this one, perhaps Nico heard those interviews where Hamilton pointed out how he used to wipe the floor with Nico back in their karting days.

Score one more for Hammy.  If he does not win the world championship this year, with that car,  he may as well grow a mohawk...

The other big hit was at Red Bull.

Two aspects to consider.   Vettel is not feeling the RB10,   the RB6 through 9 were pretty much built around him and around his driving style and needs but with the new regulations this could not be done, cars are too different and Ricciardo, coming in as a blank slate of sorts is driving what they give him,  happily without getting hung up on whatever it is that Seb is missing to do his thing.

The other is the team showing him zero respect.  Once gain he got the Felipe Massa treatment.  This would never have happened in previous years so,  despite all the the kumbaya comments after the race, either being a four time world champion means little at Red Bull or perhaps Marko and company know Vettel has a signed contract tucked in his pocket?

Either way, man what a beating, tough luck there.

Hamilton may have been faultless but let's face it, Chilton could score points in the Mercedes.  The star of the race has to be Alonso.     Another wicked start and first lap,   a bit of luck surviving Massa's  sideswipe  (Massa's "he crashed me"  will go down in the annals of silly F1 driver whines).  He chased down Vettel and then pounded around fast enough to finish third, after the week Ferrari has had?  Badass. 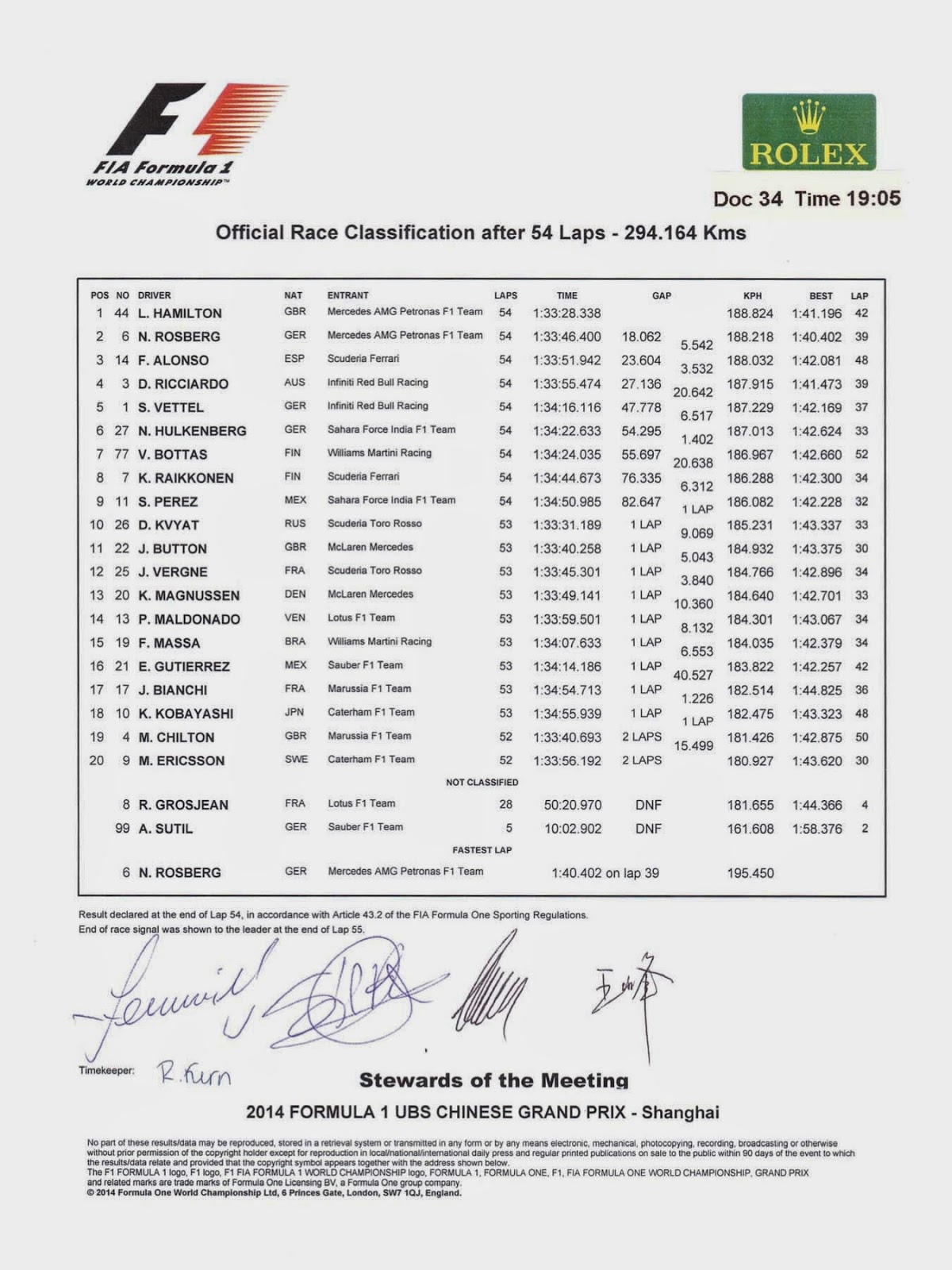 Poor Stefano Domenicali must wonder, what is Montezemolo had showed up in China rather than Bahrain?     The pace is still not there to take it to Mercedes but, if Ferrari had set the goal of being the next fastest, that they accomplished.  Not bad for a team already written off by most of the press.    I bet Ron Dennis is wishing he had a team principal ready to do what Domenicali did.

The only sour note for the Scuderia was Raikkonen, like Vettel, it seems he's not getting the new cars fully yet.