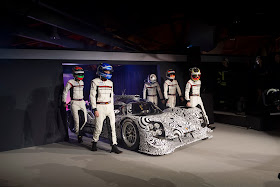 Porsche 919 Hybrid,  that is the official name for the four cylinder hybrid LMP1 entry from Stuttgart.

Porsche announced the name with a nod to the  all conquering 917 and  the 918 Spyder hybrid at the annual Porsche Night of Champions prize giving ceremony.

The final driver lineup for the two car Le Mans attack was named with Brendon Hartley and Marc Lieb joining the team with Mark Webber, Romain Dumas, Neel Jani and Timo Bernhard.   We'll be curious to see if they will split the cars with drivers with F1/open wheel experience (Webber-Jani -Hartley) and the Porsche factory drivers (Dumas-Bernhard-Lieb).

Porsche feels hybrid efficient vehicles are its future and gaining experience in producing high performance systems fitting the brand's image and history is the reason behind this effort.

"...to continue leading the way in the future and to merge sportiness with sustainability, we need to keep learning. Maximum efficiency in energy consumption is the directive of the new WEC regulations for the works-entered class 1 prototypes – and that is also the direction for the automobile future"

On the non hybrid front, Porsche announced official entries in the WEC GT class with the recently acquired Team Manthey running two 911 RSRs  and  the return of official entries to North American racing with CORE Autosport in the new Tudor United Sportscar Championship.  CORE will enter two 911 RSR starting with the Daytona 24 in January. 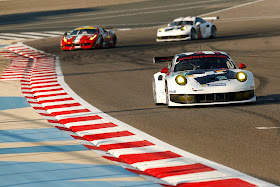